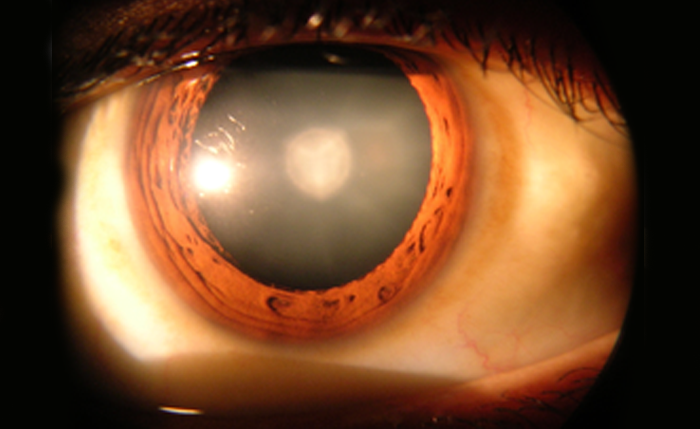 Though not the sexiest of topics when it comes to pearls for perfecting cataract surgery, basic microscope settings are one of the most fundamental and foundational steps to set the stage for a clear operation.

“I often work with residents who are new to using the operating microscope. They are often nervous and can easily over accommodate during the surgery,” said Matthew Wade, MD, assistant profes- sor, Gavin Herbert Eye Institute, Univer- sity of California, Irvine.

One trick that Dr. Wade offered to avoid over accommodating is to have those in training zoom in all the way. Then, us- ing the microscope handles, adjust the focus so the cornea is in focus. From there, zoom back out until the field of view is sufficient.

“Any further fine focus with the micro- scope pedal should be minor,” Dr. Wade said. “If they press on the fine focus for an extended period of time they are likely accommodating. This method helps them get the case started correctly.”

“Being young has many ad- vantages, but accommodat- ing during cataract surgery is not one of them,” said Robert Cionni, MD, The Eye Institute of Utah, Salt Lake City. “After a day in the OR, headaches are certain if ac- commodating all day long. I have a routine that helps me minimize accommodation.”

This routine, Dr. Cionni said, includes adjusting his PD start- ing with the oculars wider than his expected PD. From there he brings them together slow- ly until he achieves binocular- ity. When adjusting the micro- scope’s focus, he starts with the focus point above the eye and slowly focuses the scope down until the eye is just in focus.

“The concept is similar to starting a refraction in the ‘+’ range to prevent a young patient from accommodating during the refraction,” Dr. Ci- onni explained.

«It also allows me to get my knees un- der the stretcher comfortably. The only limit to tilt is my arm length. I prefer to keep my arms bent instead of stretched out far,” he said.

Drs. Wade and Garg, in contrast, said they prefer leaving it perpen- dicular to the floor. Dr. Garg said this position can help prevent parallax, while Dr. Wade likes the red reflex this position provides

To maximize red reflex while making the capsulorhexis, Dr. Garg said he uses coaxial light and minimizes the surround light. “I also make sure the scope is aligned with the eye as much as possible,” he said.

“If needed, I will decrease the oblique light to improve the red reflex or de- crease the aperture if light reflecting from outside of the cornea is bother- some,” Dr. Wade said.

Dr. Wade cited a study by Cionni et al. that evaluated the red reflex and surgeon preference between nearly collimated beam illumina- tion and focused beam illumination microscope systems.1 The research determined via a survey that sur- geons found the red reflex was maintained over greater distances from the pupillary center and at a greater depth of focus with the nearly collimated illumination.

“The larger red reflex of the nearly colli- mated microscope can be helpful in the case of patient movement,” Dr. Wade said. “The paper showed that focused beam microscopes have a usable red reflex to be 8.7 mm. For a relatively stable patient, this is sufficient to per- form a 5 mm to 5.5 mm capsulorhexis.”

Dr. Wade said he prefers the Lumera microscope (Carl Zeiss Meditec, Jena, Germany), which has a focused illumi- nation beam, but “at the end of the day it comes down to surgeon (and surgical center) preference.”

Dr. Cionni said he finds that the focused beam of light provides for a slightly crisper, detailed focus. There is a com- promise, however, with the smaller depth of focus and loss of red reflex when not centered or if the eye is tilt- ed, he added.

“The advantage of a collimated beam is a broader red reflex so that the ar- eas outside of the center of focus are well visualized, even if at the edge of the field of view or if the eye is tilted. One small compromise is the possibility of glare off of instruments such as the broad blades we use for the primary in- cision. The detail with this style of illu- mination is still exceptional, and since the depth of field is better than with a focused beam, I find that my need to focus up or down is minimized,” Dr. Ci- onni said.

focused visualization, and 8–10x magnification for nuclear fragment remov- al, which he finds gives enough perspective to show what is going on in- side the eye. Dr. Wade’s general preference is to use whatever magnifica- tion allows him to see the majority of the area ex- posed by the speculum.

Dr. Cionni said he per- forms most of his surgery under low magnification to increase depth of field and minimize the need for fo- cus adjustments.

“In general, I like to have the magnification at a lev- el that allows me to see the entire eye including some of the sclera all in one field. This allows me to monitor all aspects of what I’m doing. At times, I will increase the zoom in order to appreciate even finer details, for instance, while polishing the poste- rior capsule,” he said.

Dr. Wade offered similar thoughts regarding de- creased magnification for increased depth of field. In addition, he said, reduc- ing aperture will increase depth of field, but at the cost of light transmission.