Immunotherapy to treat cancer could cause a rare but serious eye condition, researchers from the University of Michigan’s Kellogg Eye Center, Ann Arbor, Michigan, reported in JAMA Oph-thalmology.1

“Immune checkpoint inhibi¬tors provided big improvements in the man- agement and prognosis of certain cancers, so they became a drug of choice,” said Hakan Demirci, MD, Richard N. and Marilyn K. Witham Professor, Kellogg Eye Center. “Most of their side ef- fects are observed in the skin, GI tract, and endocrine systems.” 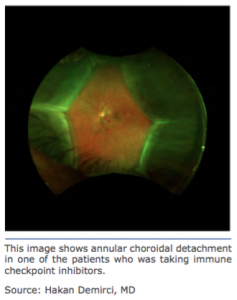 The article by Thomas et al. detailed uveal ef- fusion in three patients and is the rst report of such a risk associated with immuno¬therapy. The inhibitors taken by the patients includ- ed antiprogrammed cell death protein-1(an- ti-PD-1) and antiprogrammed cell death ligant-1 (anti-PD-L1) monoclonal antibodies. The three patients who presented to the Kel- logg Eye Center included a 68-year-old African American male with adenocarcinoma and two white men, 52 and 85 years old, respec¬- tively, who both had cutaneous melanoma.

The patients were diagnosed with uveal effusion within 1–2 months of starting immuno- therapy. Two patients stopped immunother¬a- py and the uveal effusion resolved. The one patient who continued therapy for melanoma died within 4 months. Thomas et al. think the cause might be related to in ammation from immune-related adverse effects.

Dr. Demirci said they became suspicious that the immunotherapy was the cause of the uveal effusion when the only recent change to these patients’ histories was the use of these drugs. The cases also presented almost consecutively to the clinic. In the two patients who were able to stop the medication, the ocular issue resolved, con rming suspicion of its link to immunotherapy, Dr. Demirci said.

“Sometimes patients might stop medication or try an alternative medication. However, they are important for some patients in keeping the tumor under control, and they can’t afford to stop the medication,” Dr. Demirci explained.

Overall, Dr. Demirci said studies show that less than 1% of patients who use immune checkpoint inhibitors develop adverse ocular effects. Thus, the association of ocular is- sues with these drugs is not likely well-known among ophthalmologists.

“It is important to keep in mind that immune checkpoint inhibitors more commonly can cause uveitis in eyes, and rarely uveal effusion. When a patient presents with uveitis or uveal effusion, it is a good idea to ask for medications,” Dr. Demirci said. EW

Editors’ note: Dr. Demirci has no nancial interests related to his comments.